I have written about this many times.  When whales have beached themselves in the Pacific at various Islands, including New Zealand there will be a very large quake within a week afterwards somewhere around that area of the world. 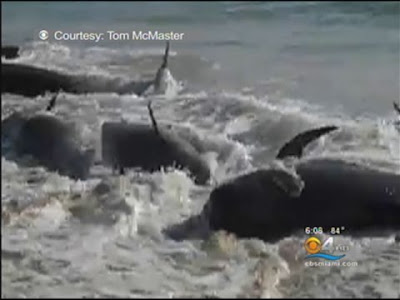 Today, a very unusual beaching occurred in South Florida.  This happens quite often in the Pacific, but not on the U.S. Atlantic side.

If you think about it.... Whales are very sensitive with their sonar regarding sounds.  Think about how tectonic plates will grind, imagine that sound amplified through the water.

MIAMI (Reuters) - Twenty-two short-finned pilot whales beached themselves along Florida's Atlantic coast on Saturday, and 17 died despite a day-long effort to save them, authorities said.

Five calves and juveniles were rescued and taken to a nearby rehabilitation center, according to Carli Segelson of the Florida Fish and Wildlife Conservation Commission.

She said the others, males and females, died of natural causes or were euthanized.

The creatures, which are the biggest in the dolphin family after killer whales, came ashore near Fort Pierce, on Florida's south-central Atlantic coast.

The U.S. National Park Service, Florida Fish and Wildlife and the National Oceanic and Atmospheric Administration participated in the rescue effort.

Segelson said pilot whales, which are considered highly intelligent, are a species that commonly strand themselves on beaches around the globe.

Such incidents often have been blamed on infestations of parasites that affect the whales' brains and their ability to stay on course. They normally stick to deep waters, where they feed on a diet that includes squid and octopus.

The cause of Saturday's beaching was not immediately clear. Allison Garrett of NOAA said necropsies might help explain what drove the mammals ashore.

"These are very social animals," Garrett said. "If one of them is sick and goes and strands, the others will stay with it, they won't leave."

Male pilot whales, which are normally dark black and larger than their female counterparts, can grow to about 20 feet and tip the scales at as much as three tons.


They always say "They don't know why they stranded themselves."

I always say, why don't they ever put two and two together and connect the dots?  Why don't they see what happens after the strandings that is Earth related?

If I can connect dots why can't they?  Yes, I always put the same questions in when I write about it too.  It has been a no fail (so far) Earth related prediction of a quake happening in that part of the world after the strandings.

Remember that the Virgin Islands are swarming right now with quakes.

So looking at the area, seeing whales beaching in Florida... I then have my original title question.... Is there going to be a large quake somewhere down there in the not too distant future?


Update 9/2/12 - Pilot Whales beached themselves in Scotland too yesterday and Great White Dead on a beach in Mass.

Posted by Questioning All at 11:10 PM