Pilot Whales beach themselves in Scotland, S. Florida and Great White dead on beach in Mass. Our contaminated Oceans

The last day has brought beaching of Pilot Whales around the Atlantic coasts.  From Scotland to S. Florida, Pilot Whales beached themselves. 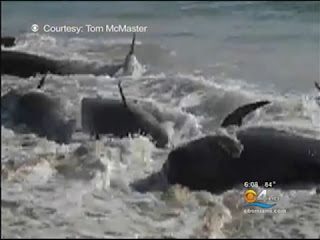 I wrote about the S. Florida beaching, last night.

I stand by my analysis, especially  with the Scotland beachings.  The whales are willing to commit suicide it seems, instead of staying in the water.  The sound of the grinding Earth may be too much for them and their sensitive sonar. 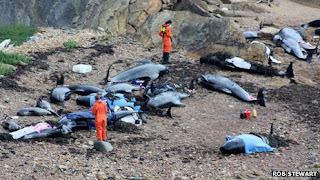 29 Pilot Whales beached themselves in Scotland, yesterday. 17 whales have died at that beaching and they believe 12 will live. 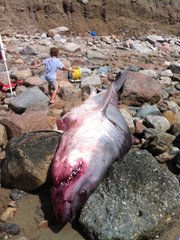 Then there is the bizarre story of a Great White dead on the beach.  No obvious signs of trauma, foul play, accident, etc.  Besides that, what is really strange is, it had nothing in it's stomach.  So it had not eaten.  Yet they say the amount of Great white's this summer in Mass., has been tremendous due to all the seals there.  Why hadn't it eaten, if there are so many seals?

Our oceans have become contaminated from Fukushima, BP and their oil leak and how they continue to spray corexit in the Gulf of Mexico.  They would not tell the EPA what is in it, so the EPA says "Oh, sure do what you want and kill the sea life and contaminate the water of the Earth."  The U.S. govt. looks the other way when it comes to big business.

It just came out that Russia has been dumping major amounts of radioactive waste in the Arctic for decades.

The catalogue of waste dumped at sea by the Soviets, according to documents seen by Bellona, and which were today released by the Norwegian daily Aftenposten, includes some 17,000 containers of radioactive waste, 19 ships containing radioactive waste, 14 nuclear reactors, including five that still contain spent nuclear fuel; 735 other pieces of radiactively contaminated heavy machinery, and the K-27 nuclear submarine with its two reactors loaded with nuclear fuel.

It is simply amazing to me how the Earth has been contaminated from those at the top and the governments of the world.  It is also amazing how they say Nuclear energy is clean!  Nuclear energy is the most Toxic form of Energy that is destroying the Earth and the living creatures of the Earth!

Radioactivity does not just go away!

Those at the top of the feeding chain don't give a Shit about the Earth, sea animals, human beings and all other living forms.  They care about their power and money.

How can people really believe that the Earth can keep surviving the toxic contamination that is happening?  Our oceans are dying, the proof shows up over and over again.  From all the dolphins and millions of fish that have washed up ashore in the Gulf this year and since the BP oil volcano began.

I also stand by the fact I believe we will see something major, Earth wise in the Atlantic in a short amount of time, due to the Whale beachings.   26 more quakes overnight in the Virgin Islands on the Puerto Rico Trench.

Posted by Questioning All at 10:45 AM