Max Keiser - "Hotspot Greece" - Greek government turned over ALL Assets of Greece to IMF and bound the people as Slaves for the loans/debt. Obama's secret treaty taking away U.S. Sovereignty. We are all being sold as Slaves

Max Keiser went to Greece last year. I believe this is very important to get out to more people. Jim Sinclair has this up on his site to help people understand all that is happening. Max reveals the absolute truth about Greece and their IMF loans. Greece handed over every single asset of the country, including bounding the people of Greece to be slaves to the banks and IMF.

This weekend the Greek elections are happening. But what is even more important that is happening also is the Egyptian election. We already know that both will be most probably fraud. The Egyptian court yesterday dissolved the parliament, which the Muslim Brotherhood had 1/3 of. They have given control back to the military. They are going to make sure the Mubarak man will win and that way everything will continue as it was before.


In the U.S., Obama is also working on the same type deals. Obama has been negotiating a secret treaty that would take away the U.S. Sovereignty. He has been doing it on his own and even those in Congress who are normally part of any treaty being negotiated, did not know about it.

People need to seriously understand, every single man, woman and child are being sold as Slaves to the bankers.  Understand that they are organizing it to where every one of us will be slaving away to pay the banks.   Slavery supposedly ended a long time ago, but that was overt slavery.  What they have done is converted it to hidden slavery, but slavery just the same.

I sincerely hope the people of Egypt and Greece Rise UP and say NO over and over again to the slavery they have been forced into by fraud of the banks.  Goldman Sachs created the Fraud in Greece and it seems their ultimate goal was to make the Greek people indentured slaves of the IMF and banks.

I do not believe they will ultimately win, they may be winning the battles but I don't believe they will win the war!  The people of the world, know when they are being enslaved and they are feeling it more and more.  In fact the governments of the world are not even hiding what they are doing anymore.   The banks are not hiding the facts they control the governments of the World.

A perfect example is Jamie Dimon testifying to the Senate the other day.  Which everyone of those Senators kissed his Ass!  They are all owned by JPM, they are all bought and sold puppets of the banks. 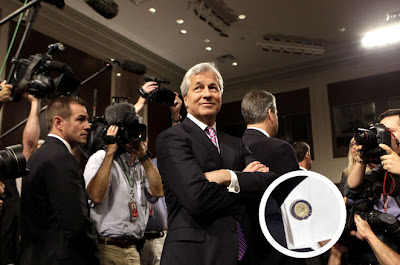 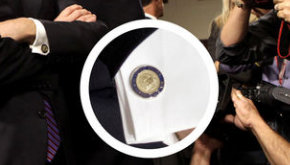 Dimon was so blazon that he even pulled a stunt of showing exactly WHO is IN Control! He wore "The President of the United States" cufflinks to the Bull Sh** kiss his ass hearing.  He made it blatantly obvious that he is "The President of the United States" that he controls Obama.  Yes the President cufflinks are available for sale.  BUT is anyone really going to wear those, especially in front of the Senate?
ONLY someone who is sending a message to everyone is going to wear those for the world to see.    Besides look at his little smirk on his face, before going into the hearing.

CNBC has a story on it and they are saying Dimon did it to show his "Patriotism" for the U.S.  LOL  Are people really that stupid to believe such a thing?  You have to laugh at that excuse.   There are many more ways of showing Patriotism than wearing "The President of the U.S." cufflinks.    Funny - they didn't include a picture of him in the story.

Every single elected official is a puppet of the banksters.  I love how Max Keiser always reveals the truth about what is going on.  He explains it in a way everyone can understand it.  Please get the videos he did that are inserted above, out in the public more.  Through knowledge that is explained so well, maybe more will wake up to all of us purposely becoming indentured slaves.

I want to make an important point.  I read Drudge, BUT I have always noticed they do NOT carry any negative Wall street articles at all.  He puts up inflaming type articles always to divide people.  But notice there is nothing that is negative against Wall Street, he does not reveal the truth of Wall street.  That tells me he too is bought by Wall street.  Start paying attention to what he puts on his site.  Just like the information about all the banks that are on the Fed board, gave themselves 4 Trillion in secret loans,  his not on his site today.  That is big news and should be getting out to the public.  He is part of not revealing what the banks are really doing and having people look the other way.

It is through the real alternative media, like What Really Happened and other sites, we get the real news.  It is through all of us being diligent in uncovering truth and revealing it, that we will win.

Posted by Questioning All at 10:24 AM